Watch: Dinesh Karthik nearly gives up running; Yuzvendra Chahal fumbles, but recovers to run him out

Yuzvendra Chahal nearly made a meal of an easy run-out opportunity to send back Dinesh Karthik.
By Kashish Chadha Tue, 26 Apr 2022 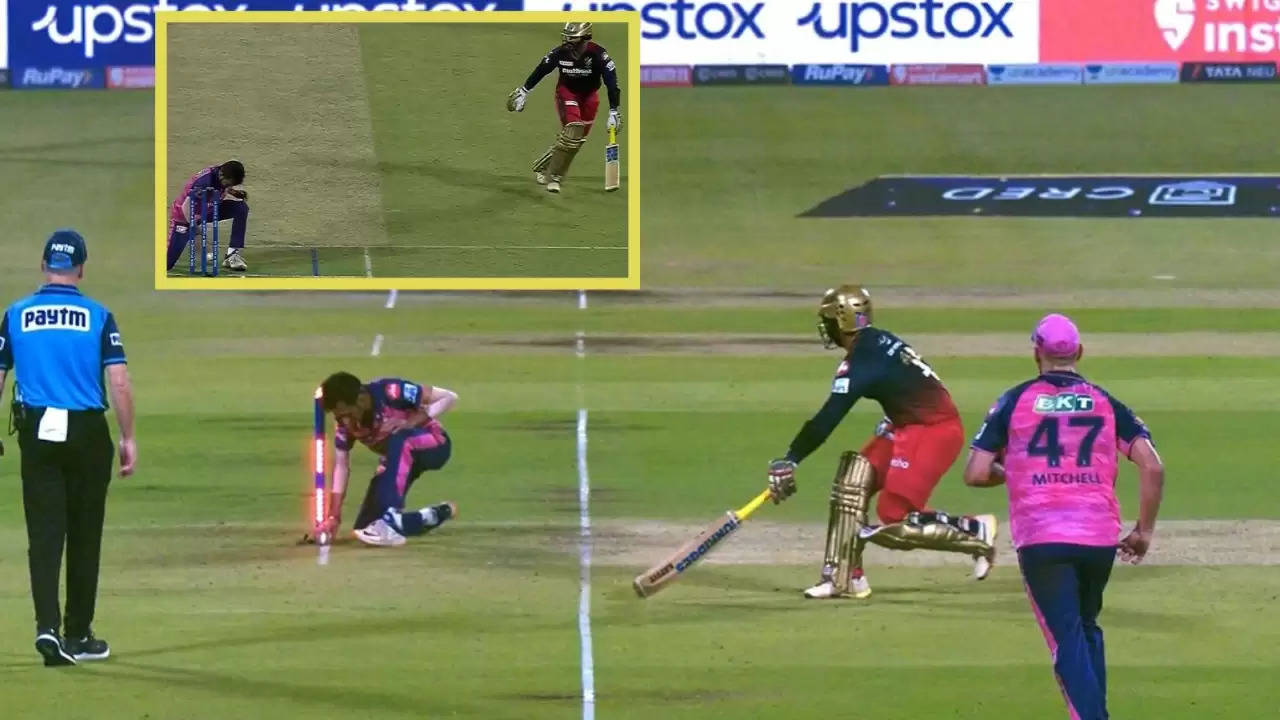 Both Yuzvendra Chahal and Dinesh Karthik made errors but the bowler made timely amends to dismiss his India teammate.

What should've been a straightforward run-out was reduced into a close shave by a misfield from Yuzvendra Chahal in an IPL 2022 league-stage encounter on Tuesday (April 26), where the Rajasthan Royals (RR) spinner nearly gave an in-form Dinesh Karthik the reprieve.

Karthik had a massive error in judgement of the single along with his partner Shahbaz Ahmed, as the Royal Challengers Bangalore (RCB) veteran kept running to the batting end, only for the run to be declined by Shahbaz and him to be left for a hopeless return to his original mark.

But just as Karthik was about to give up seeing the ball travel to Chahal's end, the bowler failed to make a clean grab in his attempt to dislodge the bails and it fell off his hands, giving the batter a thin chance of securing his wicket.

In timely amends, however, Yuzvendra Chahal overcame his initial fumble to eventually hit the stumps and find Karthik short his ground by a distance, allowing his team to get the big wicket they were vying for.

Yuzvendra Chahal fumbles but retracts to get Dinesh Karthik out

Vulnerably placed at 72/6 in the 13th over chasing RR's modest but competitive 144/8, Karthik was RCB's last hope on the park. The Royals were desperate to see the back of him and that opportunity was presented to them by the batter himself in a horrible error in judgement of a single.

Facing Yuzvendra Chahal, Shahbaz tapped the ball to the mid-on region where RR fielder Prasidh Krishna was placed. Karthik just instinctively ran for a single when there wasn't one and nearly reached the batting end by himself. He recognised his fate early and gave up, not realising that Chahal has failed to properly collect the return throw from Prasidh at that end.

What didn't help Karthik was the fact that Shahbaz had taken a few steps on the move as if to suggest he is going to go for the run. This made his experienced partner commit to the single, for which he paid the ultimate prize.

Chahal went down in frustration but had enough time to pick up the ball and hit the stumps, with Karthik still way short of the crease.