Zimbabwe came up with an interesting mode of celebration after sealing one of the spots at the T20 World Cup 2022.
By Kashish Chadha Wed, 20 Jul 2022 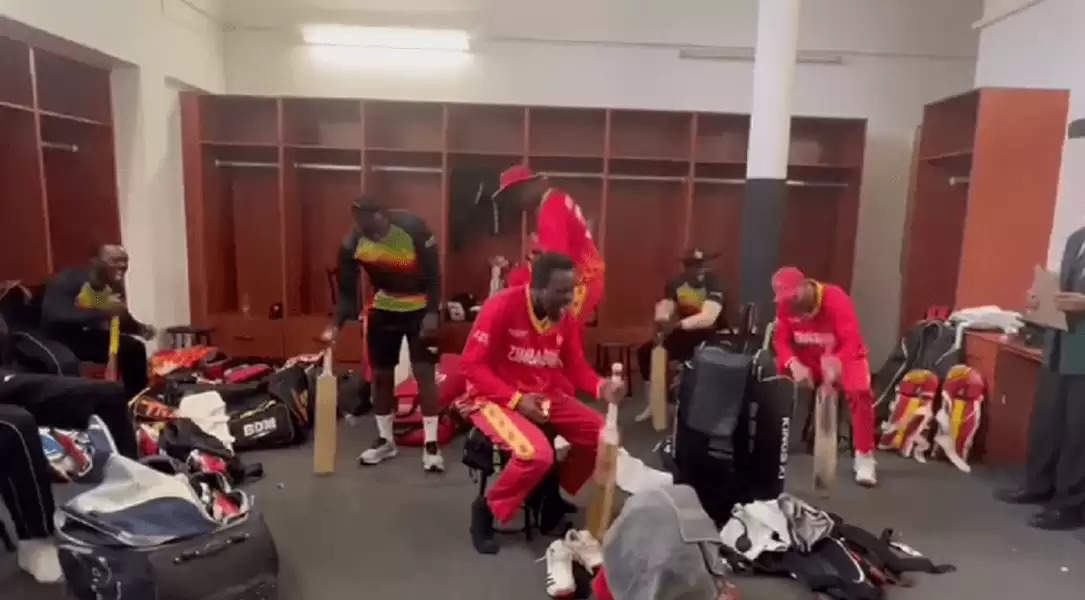 The bat-tap celebrations were unveiled by Zimbabwe after winning the qualifier semifinal versus PNG.

Zimbabwe came up with an interesting form of celebration after making it through the T20 World Cup 2022 global qualifier. The lower-ranked African rivals unveiled a unique bat tap to enjoy their moment of glory in Bulawayo after sealing one of the final spots available for the marquee event in Australia.

In a clip shared by Zimbabwe Cricket (ZC) over their official Twitter handle, Craig Ervine & company were seen expressing their happiness in an interesting fashion, repeatedly tapping the bat on the turf down their feet inside the home team dressing room.

Having dominated Papua New Guinea in the semifinal played at the Queens Sports Club, Zimbabwean players relished their rare triumph of lifting an ICC trophy and gave it their unique touch by bat tapping their way into a collective shout in excitement.

Zimbabwe Cricket posted this amusing clip on Saturday (July 16) after their team defeated the spirited PNG side in the tournament semifinals. Having posted a massive score of 199/5 in their allotted 20 overs, the Zimbabweans restricted their PNG counterparts to 172/8 on a flat pitch that aided a high-scoring fixture.

The win confirmed Zimbabwe a place in the T20 World Cup global qualifier's final and booked them one of the remaining two slots at the marquee event to be played in Australia in October-November. The qualification being of massive importance to the African rivals, they made it a point to celebrate it big and also gave it their own unique touch.

#ICYMI: The lads celebrating after clinching a place at the ICC Men’s T20 World Cup 🏏 pic.twitter.com/ZoRQe57cz3

Backing their celebrations up with another victory, Zimbabwe went on to defeat the Netherlands in the tournament final the next day, defending a score of 132 by dismissing the Dutchmen for only 95. Despite the loss, though, Netherlands qualified for the World Cup along with their Zimbabwean counterparts.

At the World Cup, Zimbabwe will be placed in Group B of the preliminary round alongside Ireland, West Indies and Scotland, while Netherlands find themselves in Group A with Namibia, Sri Lanka and UAE. Top 2 teams from either group will qualify for the Super 12 stage of the competition.